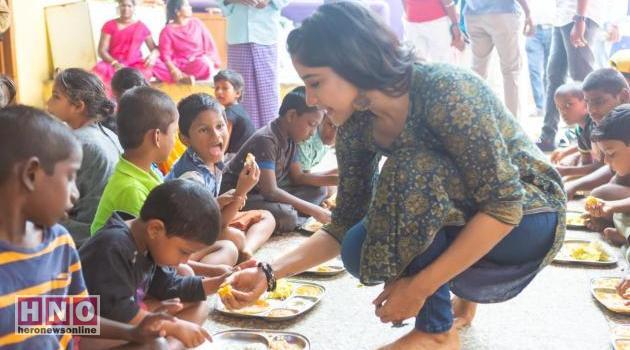 Valentine’s Day has been construed as a day for dating, roaming these days. This has made people hate V-Day.

Sakshi Agarwal is one actress who gives importance to Valentine’s Day. Her romance would be with orphaned and destitute children. She has made it a habit to spend the day with them.

This Valentine’s Day is more special as her film Kutty Story has been released. She has been to Perumbakkam New Hope and New Life destitute home and spent time with the inmates distributing food, sweets. This is how I celebrate the day, she says.

She Added, “I see Valentine’s Day as an occasion to show love and care for people around. I show my affection to orphan children. They are my lovers.

Three years ago, I chose to celebrate the two based on the concept Food For Two, meaning one gets food for two needy people. It was aimed at creating awareness to end poverty and hunger.

Last year, I chose to spend the day with inmates of HIV affected home. I undertook the mission to show the world that touching those children will not spread AIDS. It was aimed at creating social awareness.

This year I have celebrated with those staying in New Hope and New Life Home. Such celebrations will continue next year too’.

After Kutty Story, she has Cinderella ready for release. In Teddy, she plays a meaty role. She is committed to act in ‘The Night’. An animal plays a key part in it. Shooting would begin soon. Sakshi is part of Aranmanai 3 too.